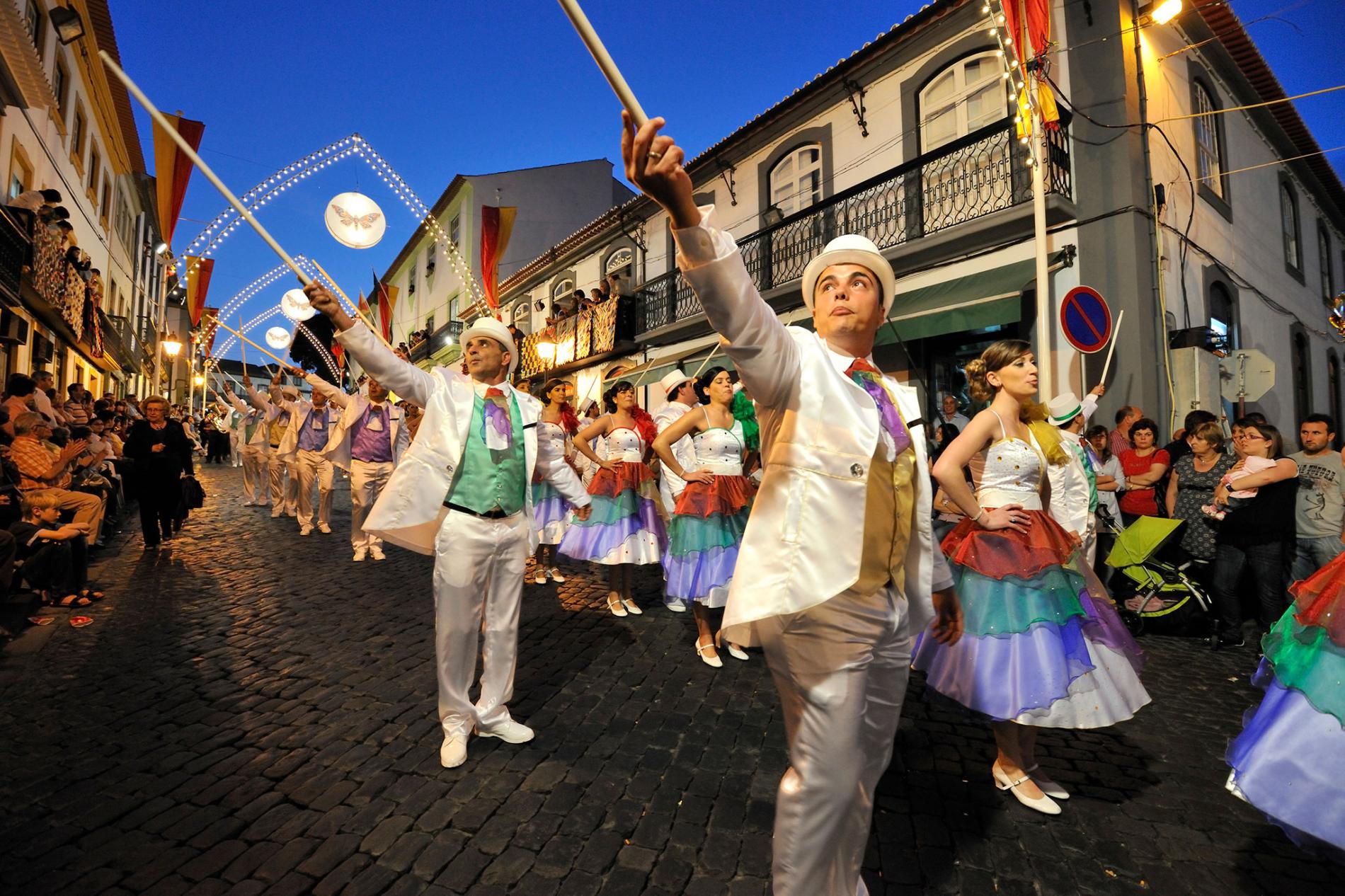 In the middle of the Atlantic Ocean, a string of nine volcanic islands rests at the intersection of the Eurasian, African, and North American tectonic plates. Portugal’s sun splashed Azores Islands are a trailblazer in sustainable tourism and boast a robust outdoor culture. The archipelago is considered one of the greenest destinations in the world, protecting not just natural wonders, but also a way of life (wine, honey, pineapple, and various cheeses enjoy protected status here). Dip your toes into the warm Azorean waters and discover paradise on these islands:

TERCEIRA: ARCHITECTURE AND CAVING
In the effusively cultured Angra do Heroísmo on Terceira island, even the sidewalks are works of art. When not admiring the intricate limestone and basalt mosaics at your feet, look up and behold the Mannerist cathedrals and Easter-egg colored mansions that fill the UNESCO World Heritage colonial city. Housed in a former Franciscan convent, the Museu de Angra do Heroísmo showcases the breadth of Terceirense culture, from naval and military artifacts to textiles and decorative arts.

Beneath the island’s refined surface lies a bizarre geological formation: the chimney and underground chambers of an extinct volcano. Climb down the 300-foot lava tube of Algar do Carvão and see for yourself. Stalactites, stalagmites, and a rainwater lake are all beckoning. 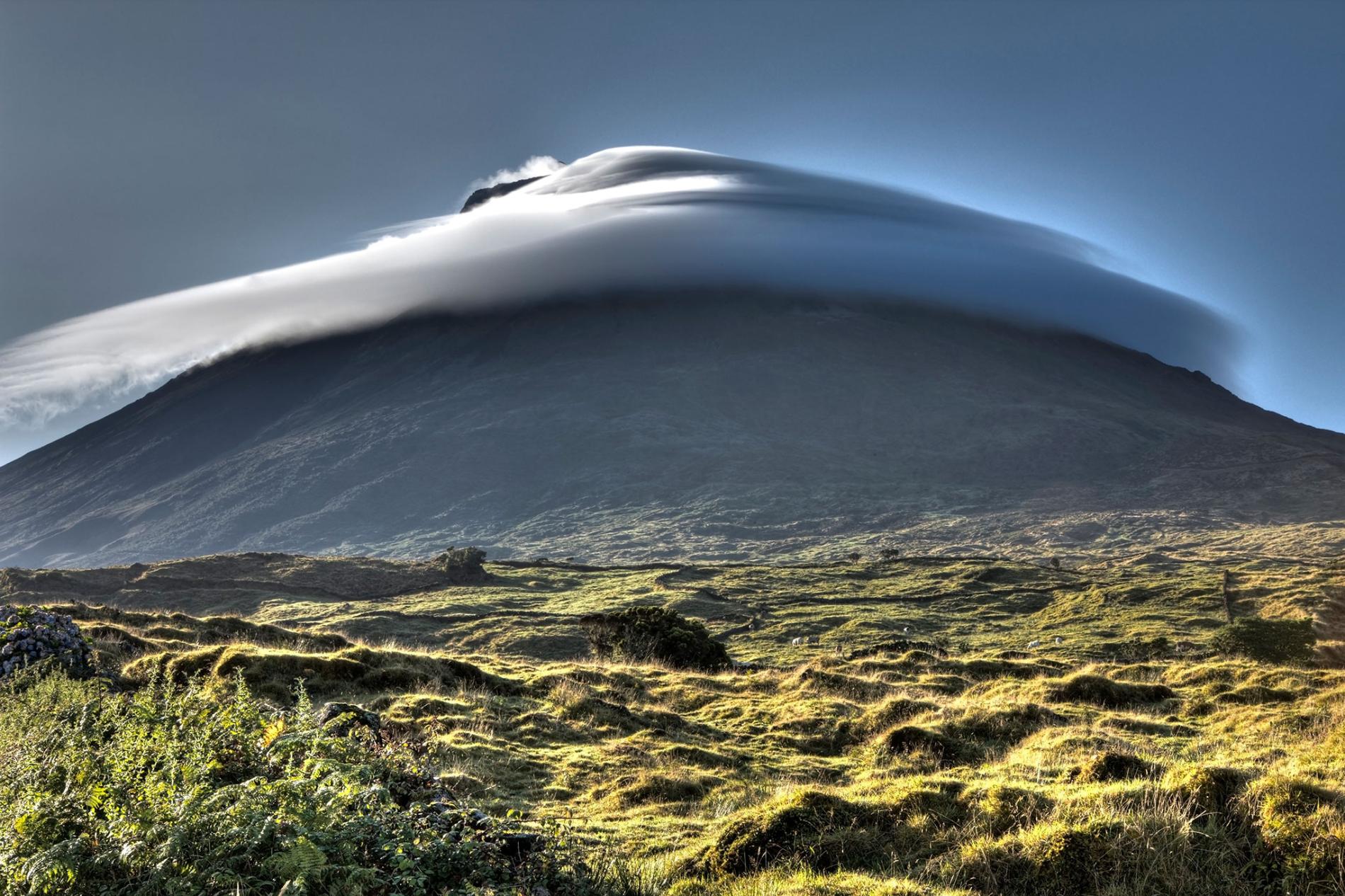 Mount Pico volcano on Pico Island
PHOTOGRAPH BY REINHARD DIRSCHERL
Soaring to 7,714 feet, the volcanic Mount Pico is the highest point in all of Portugal and the most challenging hike in the archipelago. Certified guides lead ascents and overnight camping in the crater just beneath the summit. On a clear day, five islands can be seen from the summit, though hikers should prepare for all types of weather on the exposed mountain face, including snow on the peak in winter and spring.

During the industrial whaling boom of the 18th and 19th centuries, New England whalers sailed to the Azores to stock up on provisions and fresh crew. Since whaling formally ended in the 1980s, the camera has replaced the harpoon in capturing whales here. Get a history primer at the Whaling Museum in Lajes do Pico before casting off on a whale-watching adventure. 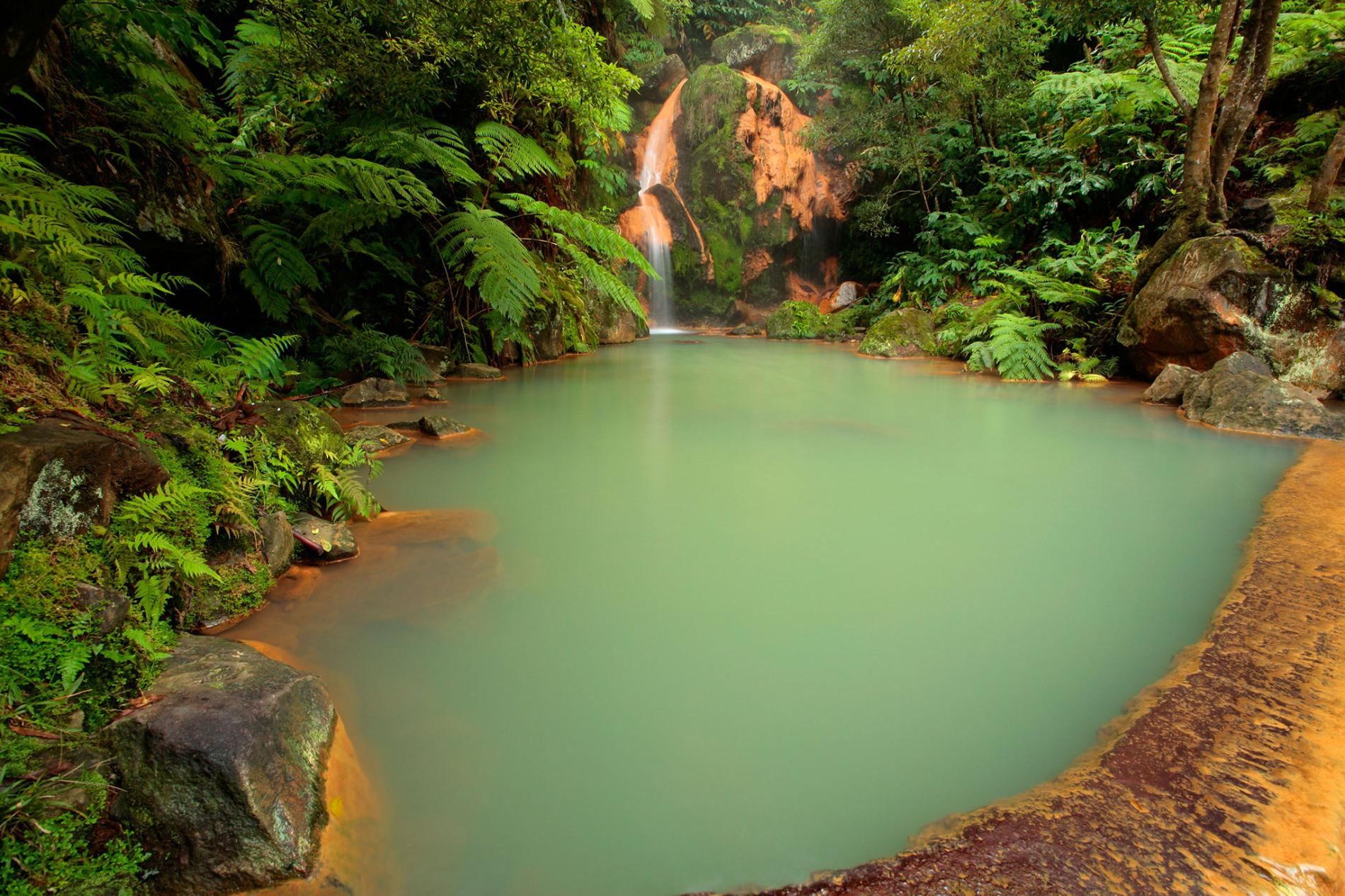 In the densely vegetated canyons of the Nordeste region, canyoneers choose between rappelling or leaping off waterfall-laced cliffs into swimming holes below. Birders also flock here for a glimpse of the critically endangered Azores bullfinch, one of Europe’s rarest birds, found only in the laurel forests of Nordeste.

For limbs weary of hiking, nothing beats a restorative soak in a natural thermal bath. In coastal Ponta da Ferraria, ocean waves crash over natural rock pools and commingle with thermal water. In fern-fringed Caldeira Velha, thermal waterfalls lend a romantic ambience to the occasion. By contrast, the boiled-egg stench and roiling steam of Furnas serve as a reminder that this region is a potent hot spot. Along the banks of Lagoa das Furnas, local restaurateurs let the Earth do the cooking by submerging giant Dutch ovens in the bubbling calderas. Try an elevated version of cozido, the region’s traditional, thermally-cooked stew, at Terra Nostra Garden Hotel, where waiters pour umami-packed broth over the stewed meats and vegetables tableside. 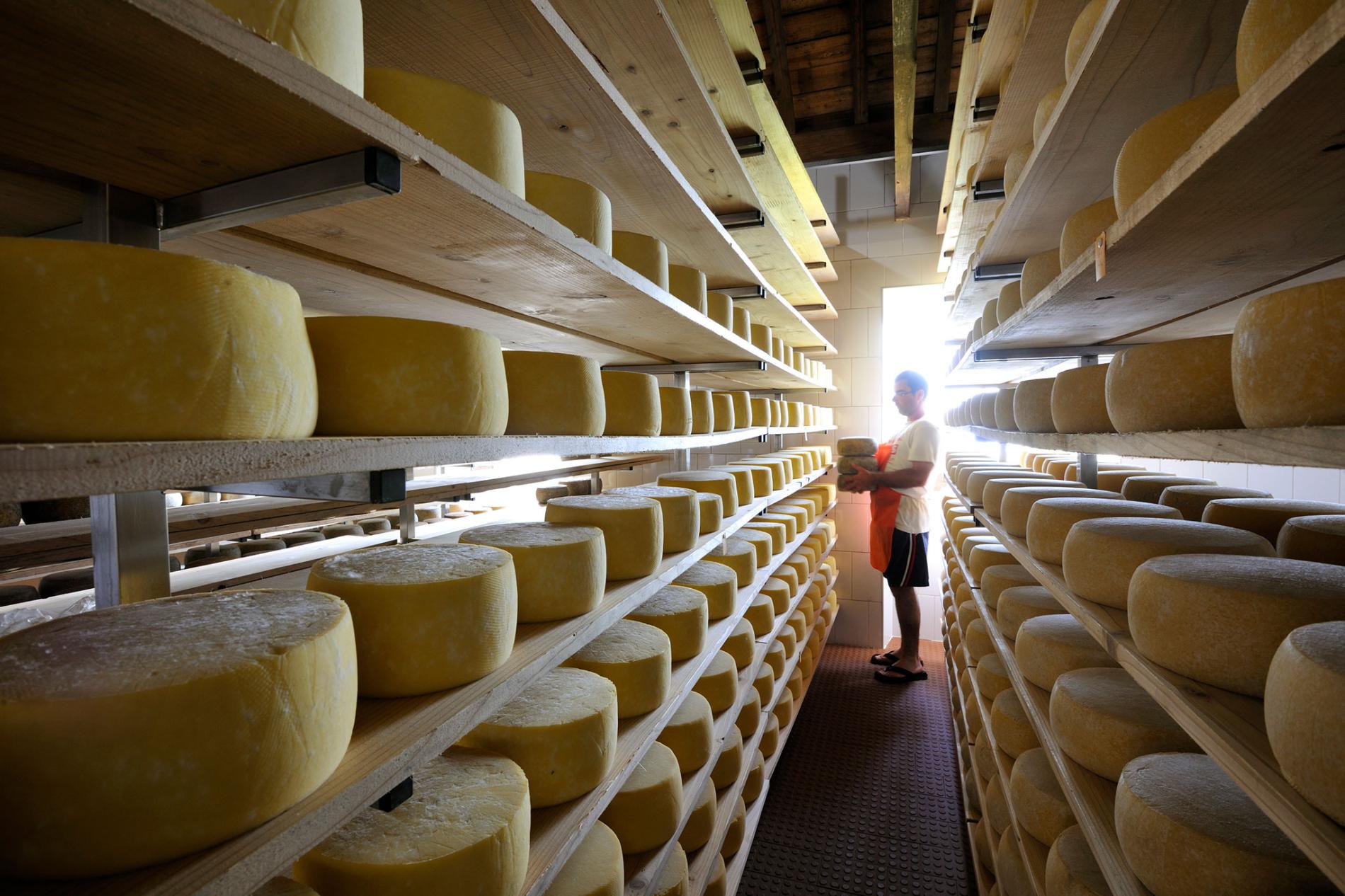 Traditional cheese manufacturer on São Jorge
PHOTOGRAPH BY MAURICIO ABREU, AURORA
To sink your teeth into a piece of sharp salty São Jorge cheese is to taste history. Early Flemish settlers of the island were thought to have brought cheese-making to the knife-shaped landmass. Today the famous cow’s milk cheese can be found in Europe and North America, but the imported stuff pales in comparison to the holistic experience of tasting it with a view of the pastures and cows that made it possible.

The long and narrow orientation of the island, 34 miles long and four miles wide, invites lengthy treks down the island’s spine. Look for trails that lead to fajãs, coastal flatlands created by lava flow or landslides, and a quintessential geologic feature of the island.

FLORES: FLOWERS, WALKING, AND WATERFALLS
Picture of waterfall on the Island of Flores, in the Azores 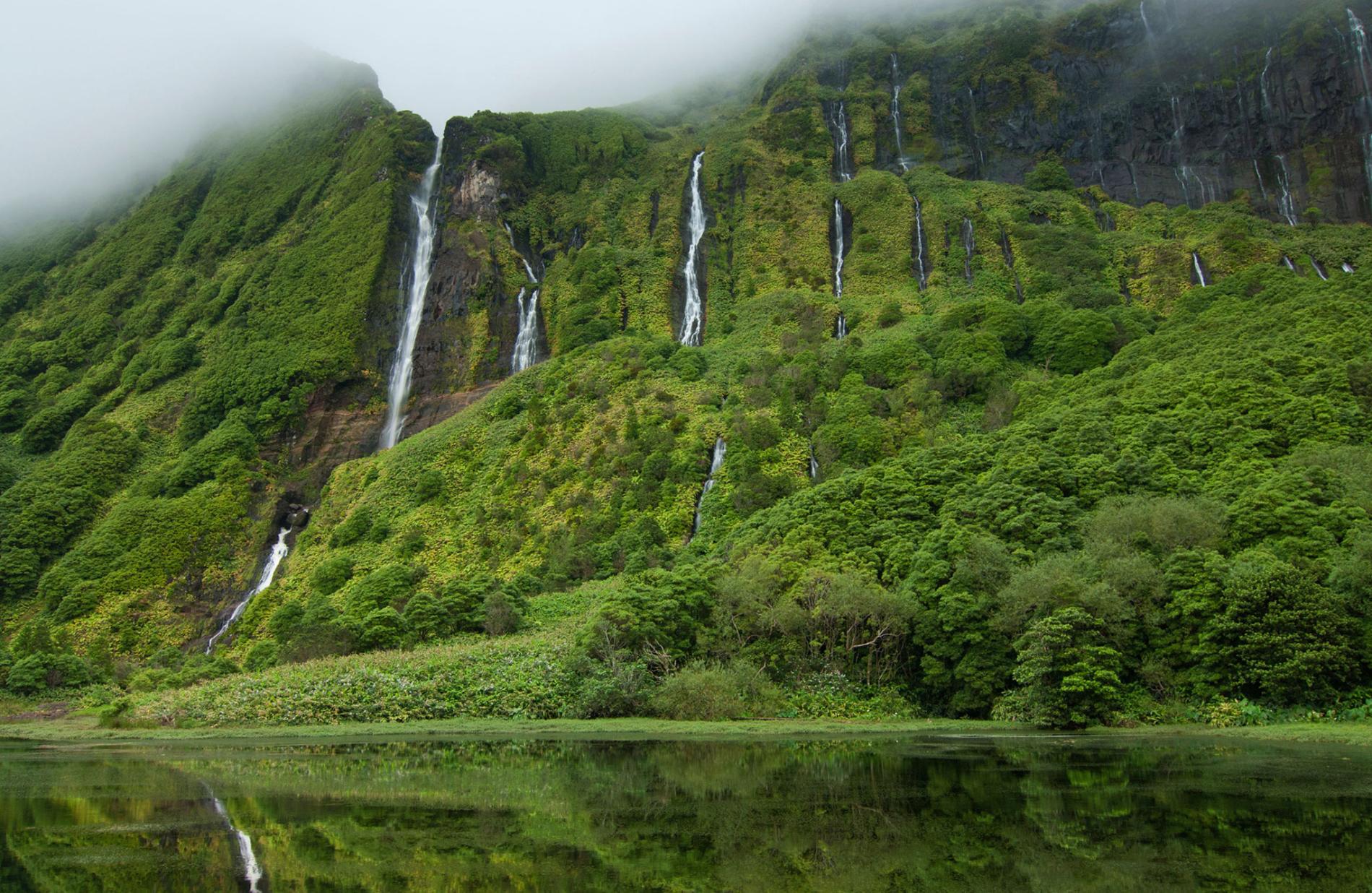 Lagoa das Patas on the island of Flores
PHOTOGRAPH BY LUIS ASCENSO
As the westernmost island in the chain, Flores is also the wettest. But all that rain means Flores lives up to its flowery name, with emerald green highlands, crater lakes, and the most vigorous of flora. Waterfall-streaked cliffs and fields of azaleas and hydrangea rank up there with the most beautiful scenes in the entire archipelago. Numerous trails cross the island, making it a walkers’ paradise. End a day of trekking on the west coast at Fajã Grande for a spectacular sunset—the last one in Europe. 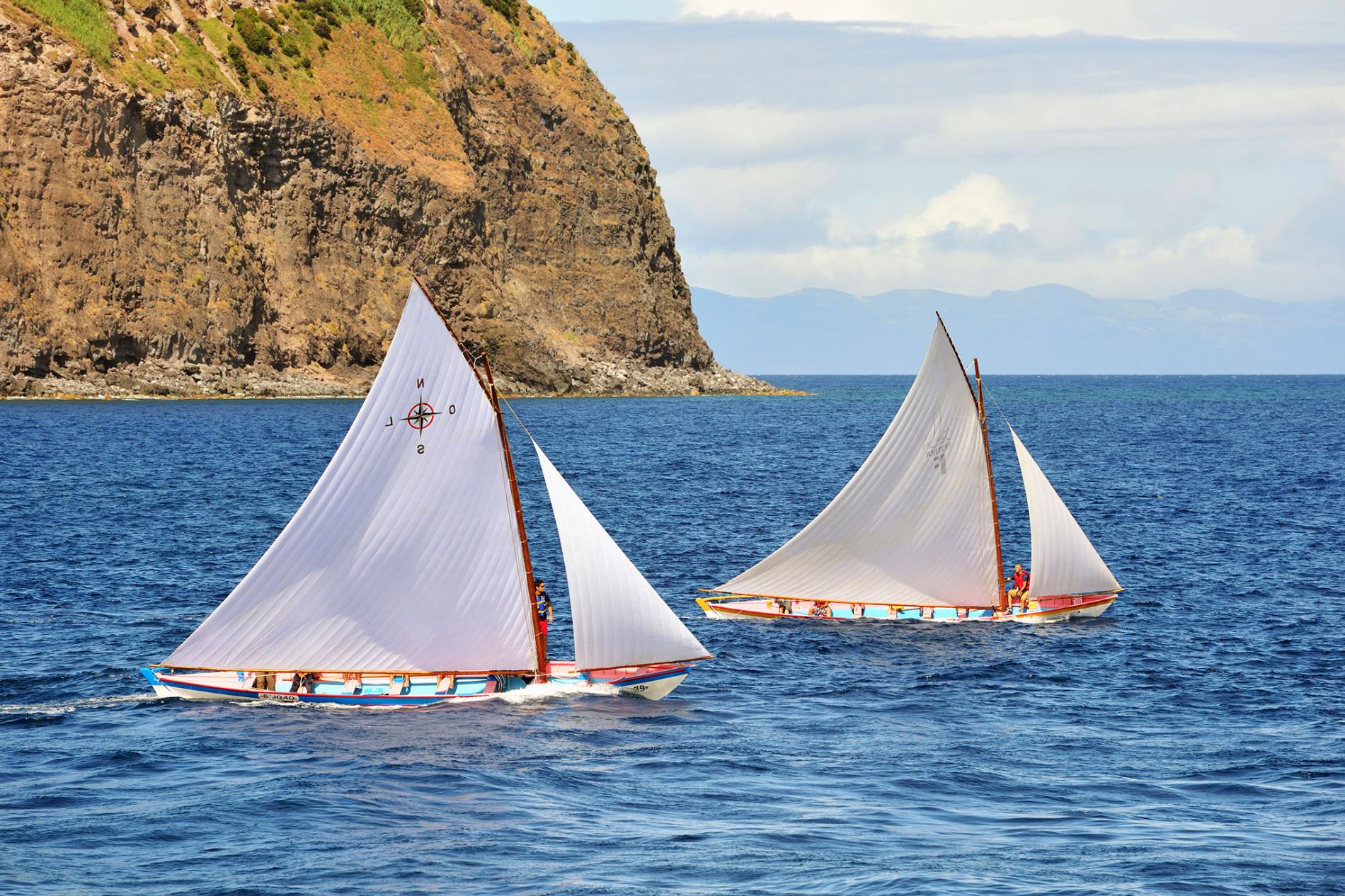 Whaling boats between Faial and Pico islands
PHOTOGRAPH BY MAURICIO ABREU, AURORA
Sailors crossing the Atlantic have rested in the Azores since the beginning of transatlantic voyages, and the cosmopolitan port town of Horta on Faial lives and breathes this maritime tradition. Stroll along the marina and admire the sailors “gallery,” where visiting crew paint emblems of their ships on the jetty. At Peter Café Sport, the salty set posts crew-wanted notices and drinks G&T’s beneath a ceiling dripping with yacht club burgees. The upstairs scrimshaw museum features a collection of carved and engraved whale teeth, a rarified art form still practiced today albeit using antique and salvaged ivory.

Across the island, a vastly different image of Faial emerges: one of raw, ferocious volcanism. In 1957, the Capelinhos volcano began erupting and didn’t stop for 13 months, spewing gases, mushroom clouds of black ash, and occasional projectiles the size of cannonballs. The seismic unrest spawned numerous earthquakes and a largescale diaspora of Azorean refugees to the United States. At just 60 years old, the barren landscape feels not of this world, with the space-aged underground Interpretation Centre enhancing the effect.

TAKE THIS TRIP
Go: Azores Airlines SATA is constantly adding new routes, making this cornucopia of adventure and pleasure more accessible than ever before.

By Sophie Massie from National Geographic – ( link available at: http://www.nationalgeographic.com/travel/destinations/europe/portugal/things-to-do-azores-islands/?sf72266015=1)

Noticias SOFT4BOOKING
Scroll to top
We use cookies to ensure that we give you the best experience on our website. If you continue to use this site we will assume that you are happy with it.Ok